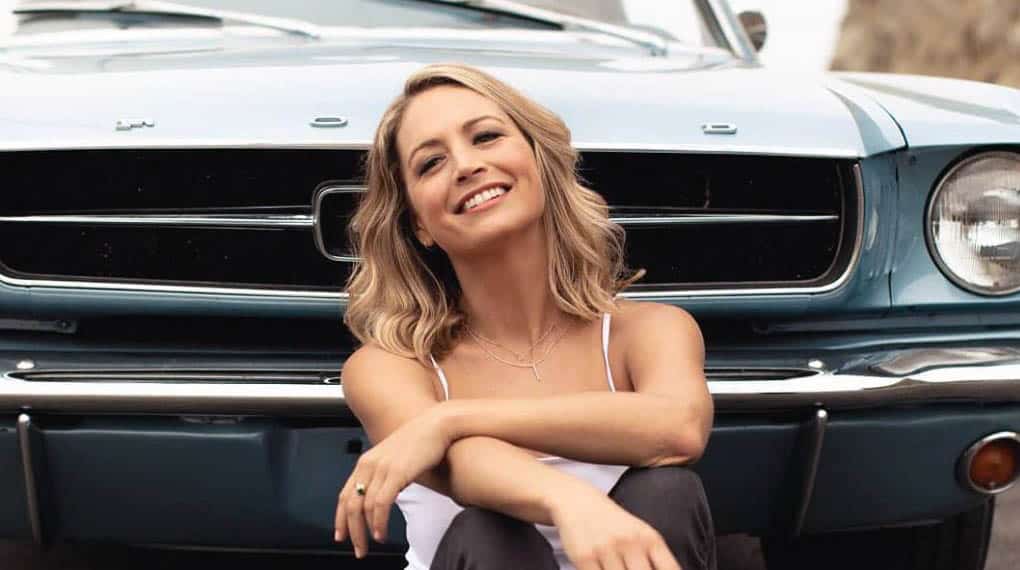 Heather Storm is 28 years old American actress, TV personality, and businesswoman. She is famously known for appearing on the reality TV show ‘Garage Squad’ on Velocity Network. She was a co-host for this show that focuses on a group of guys who step in to give a helping hand to mechanics who are overwhelmed by work and ensure they finish up the projects and provide the shops a new look in Chicago.

Storm hosted the show from mid-2015 to late 2018. Read this to know Heather Storm’s age and net worth.

Heather stayed on the show’ Garage Squad’ for close to four years, starting from August 11th, 2015, and her last appearance as a co-host was on October 31st, 2018. She was present for a total of 45 episodes. Her talent, beauty, and skills made her stand out in a team of boys. She, however, left the show and started her own. Read on for more details.

Storm also has her name on other successful TV series; these include and not limited to Tae-Bo Evolution, 30 Days, The Mixdown, The Playboy Morning Show, Jay Leno’s Garage, Sleeper Cell, MANswers, Surviving Disaster, Street Tuner Challenge among others.

Ever since her first cast in 2003 in the movie, ‘Underbelly‘, Storm has had more than been featured in more than twenty films. This truly has refined her skills and prowess in front of the camera. Here is a list of some of the movies she has appeared in and the years they were released.

Whatever has a start has an end, even the good things end. After four years of being on the show, Heather’s time was over, and she had to move on. Some speculated that her contract was over. She was up to something better. She will be cruising every small town in America with her 65 Mustang.

In her Facebook post, she appreciated the time she had in the Garage Squad, the love, and much support she has received over the years. She wanted to be on her own, doing her own thing for her love of cars and adventure.

Drive Yourself Local is the name of her show that premiered in August 2018 on Youtube. Heather is also running another similar show named Man Seeks Adventure together with Brad Fanshaw and Dave Marek. They talk about cars, food, and travel.

Her new replacement in the show is Cristy Lee. Cristy is a host of a popular tv show “All Girls Garage”

Heather is a Co-founder of Black Lab ventures, a boutique, and an eco-event company. It also deals with fine wine collection. In a store with hundreds of wines, someone has to sit down and taste all of them and sample out the top five, that’s where her business comes in. This business also runs along with a consultancy firm that does a wide range of businesses.

Heather is a certified fitness trainer. She appeared on the show, 30 Days. The show is about weight loss, fitness, and yoga. She also worked at Spectrum Athletic Club for two years as a stretch technician and fitness trainer. Now you know the reason she has maintained her youthful look and fit body shape.

She is an Environmentalist.

Probably this is the most fantastic thing about Heather. From her childhood, she loved nature. She had a camera that she would go out with, taking pictures of beautiful scenes. Heather Storm went to Oregon University and was awarded a bachelor’s degree in Environmental Science.

She has participated in many conservation programs across many countries. For example, she worked as an advocate for sustainable tourism in Puerto Rico and marine conservation and designed an eco-conscious toolkit for Caribbean hotel industries.

Heather loves nature, and she had to travel far and wide to get the real experience. She had visited more than twenty different countries across Asia, Europe, and the Americans in exploring the wonders of the world. As a SCUBA diver, she took part in attempts to save queen conch from extinction in the Turks and Caicos Islands, British Overseas Territory in the Atlantic Ocean.

Working in a new project After Leaving Garage Squad.

Drive Yourself Local is a merger of all her careers. Driving in 1965 Ford Mustang for her love of cars, visiting every little town, and exploring nature on the way as an adventurous lady. She visits hotels and wine stores for her business, etc. This was a great idea that also provides an excellent opportunity to do great things.

Heather was trained by her dad, who is a DIY maverick to do many things with her hands, that includes working on engines and also shooting a gun. Yes, that’s right.

She once worked as a spokeslady for a motor insurance company and on-camera sports reporter. Heather, he has also featured in many commercials.

She is the host and producer of ‘The MixDown,’ a TV series that has gained more than 180 million impressions in Complex TV. In this show, she created a special cocktail and an electronic dancing style.

Danielle Trotta is Heather Storm’s real name. She was born on May 24th, 1986, in West Chester, Philadelphia, United States. Heather Storm is 35 years old as of writing this article. Her zodiac star is Gemini.

When Storm was twelve years old, the family move from the big city to a small town in Montana. She spent most of her days at the Big Snowy Mountains in her hometown riding bicycles on the road and wandering in nature.

Her mother’s name is Phyllis Trotta, and her father was Dan Trotta. Details of having other siblings are not available. Their family loved camping, and this installed her love for nature.

As she grew up, she loved surfing and exploring the beautiful beaches in Puerto Rico where she attended her college studies, but to get more, she abandoned the easy life at the ocean and went to Los Angeles where she started off her career that bore much fruit as a result of hard work.

Heather is Not Married to a Husband Yet.

Without a shred of a doubt, no. She is not married and has no children. Heather has kept her relationship life so private, and as long as we are a concern, she has never been spotted with any partner, either man or woman.

With all that talent and a successful career, we hope she meets her perfect match soon. And when she does, be sure to find it here, we will gladly break the news.

Heather’s net worth is estimated to be $3 million. This is an accumulation of a long stretch career that has yet been over a short period. She also owns a Mustang whose market value is unknown. She also runs a business. Her salary is, however, unknown.