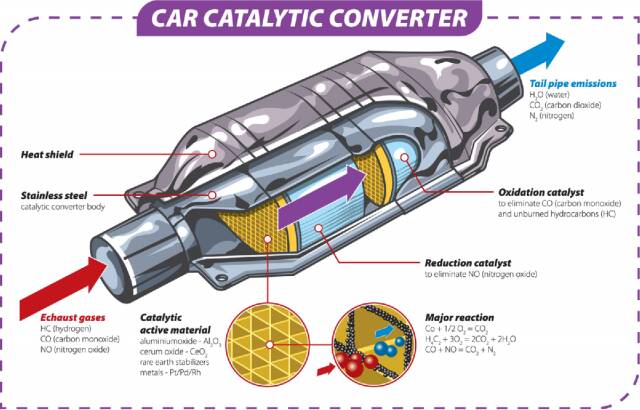 Catalytic converters are small, easy to steal, easy to access, and highly valuable. There is a large market built around the theft and recycling of catalytic converters. Maybe that is why theft cases went up by 325% in the states in 2020 as National Insurance Crime Bureau (NICB) suggests.

Many videos of real cases verify that two professional thieves can steal a catalytic converter from a car in under 2 minutes. This is alarming due to the fact that CATs are among the most valuable parts of a car and can cost up to $5K. So, why are catalytic converter theft cases rising? Why do people steal it and how to prevent it? Let’s find out.

What are Catalytic Converters?

Catalytic converters are exhaust cleaning devices that use precious metals as catalysts to react with and clean emission gases such as Carbon Monoxide, Nitrogen Oxide, and other hydrocarbons.

The by-products of the reaction of precious metals and harmful emissions are water vapor and carbon dioxide.

The device represents a hot water bag made of steel with a tube on both sides. On the interior, it flaunts a honeycomb model that has precious metals. Rhodium, Palladium, and Platinum are the most common catalysts used in CATs.

The gases in the exhaust pipes react with these elements and break them down into environment-friendly compounds. Catalytic converters are compact and precious devices. They are prone to theft and have a high resale value as well.

Do All Cars Have Catalytic Converters?

Fuel Injected engines produce a lot of harmful gases in their combustion chambers. Thus, catalytic converters help to clean up and react with these gases. Catalytic converters regulate according to the Clean Air Act and all FI engines must have one CAT.

How Many Catalytic Converters are in a car? 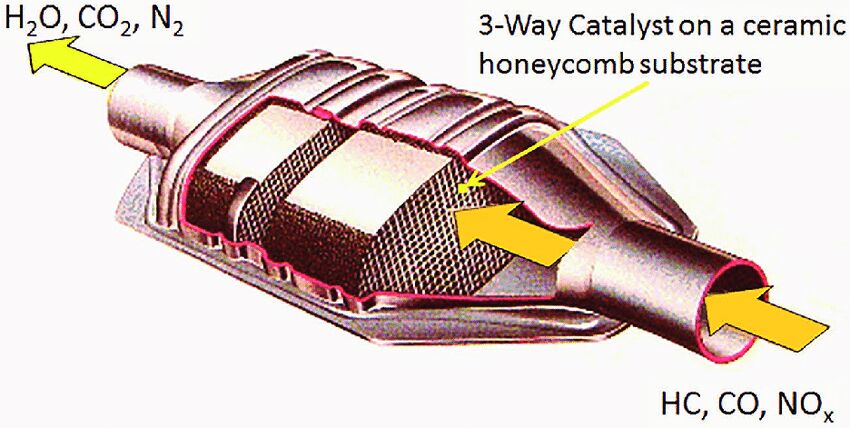 Most cars have a single exhaust so they have only one catalytic converter. However, there are vehicles with dual exhaust which require two CATs. Even though catalytic converters are prone to theft, they are really durable and can even outlast the lifetime of a car.

Catalytic converters, even in their useless form, can still hold intrinsic value for their high demand in the commodity market. Thus, the prices for scraps will likely never drop below $300.

Catalytic converters are easily the most stolen parts of automobiles. They are madly expensive and the worst part is that it can take up to three months to get a replacement for your stolen catalytic converter.

A regular thief can sell stolen catalytic converters for about $50 to $200 each. This figure is only 10% of the total loss the car owner has to bear.

The replacement price for CATs can easily reach from $1k to 3k. So, why do people steal catalytic converters?

CATs are placed at the bottom of vehicles near the exhaust system. The device is soldered to the frame and can be easily cut off from the joint.

For experienced thieves, it is a matter of a few minutes to get a hold of an item that is more than $1000 in value.

Even though theft cases are so common, manufacturers continue to ignore the vulnerabilities of the catalytic converters. Many people claim that manufacturers are intentionally letting the thefts continue as it has a huge recycling market.

Since these high-value devices can be easily accessed and stolen, many people tend to steal catalytic converters.

It can be a major nuisance for job holders who have to make daily commutes. Thus, there is a high demand for catalytic converters in the scrap market. Since CAT thefts are so common, let’s discuss how you can prevent them.

It usually consists of a metal screen with screws that do not give thieves direct access to the catalytic converters.

If for reasons you cannot get your hands on the anti-theft device, always make sure to park your vehicle in a closed or guarded garage. A well-lit and properly monitored space is also preferred. The anti-theft devices also come with trackers in case the CATs get stolen.