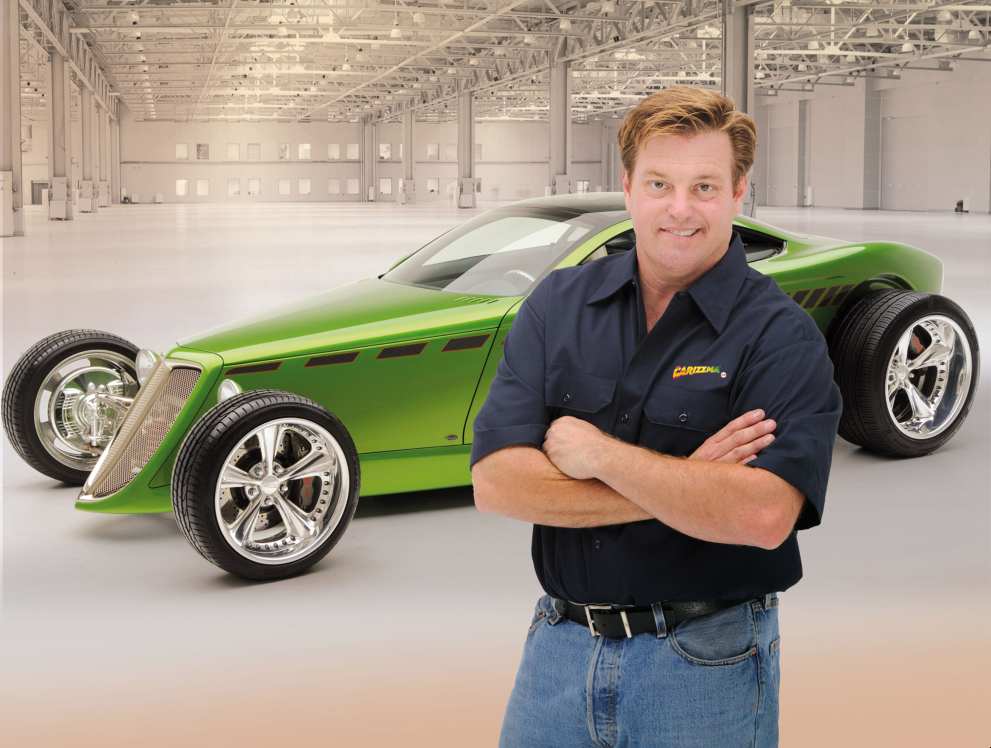 Chip Foose is a well-accomplished American automobile designer, entrepreneur, and a tv personality who rose to stardom after appearing in the reality car tv show, Overhaulin’. Moreover, he is a millionaire who has transformed his automobile business from scratch to soaring heights. Read this to know Chip Foose Net worth and Drawing. Also, meet his wife Lynne Foose.

His date of birth is October 13, 1963. Chip was born and raised by his parents, Sam Foose and Terry Foose, in Santa Barbara, California.

He attended the Art College of Design after graduating from high school in 1982. However, he had to drop out in the middle because of financial woes. But Foose returned to the Art Center to complete his education after working for four years at Clenet Coachworks.

The now-automobile expert got into the automobile industry due to his father who was a big car enthusiast and worked for a car company.

Initially, Chip started his career in automobiles by working for his father’s company at the age of seven. He then worked as a full-time employee at Stehrenberger Design for a couple of years.

Later, he joined Boyd Coddington’s company in 1990. After working full-time at the place, Foose eventually became the president of Hot Rods by Boyd in the following year. However, the company faced bankruptcy in 1998 which forced Chip to start his own automobile company called Foose Design in Huntington Beach, California, in the same year.

In 2006, he also helped to start the Ridemakerz customizable toy cars business. Foose continues to operate Foose Design and provide design consultations to the Big Three automakers to this present day.

Chip debuted on television for the first time in 2003 when he became a part of the TLC documentary. In the documentary, he designed and modified a 2002 Ford Thunderbird car called Speedbird. Instantly, he was able to enthrall the audience with his skills which helped Foose to gain massive popularity on Tv.

The following year, Chip starred in the TLC reality show Overhaulin’ which further boosted his popularity. The show focused on transforming old and antique vehicles into modern cars within a week. The show was so well-received that it successfully went on for 9 seasons. Likewise, it made its comeback to television in 2020.

As of 2021, Chip is married to his longtime girlfriend and the love of his life, Lynne. She is a former graduate of Western State College of Law and a young business owner who currently serves her husband’s business by dealing with legal documents, finances, and administration. She is also the spokesperson, vice president, and Corporate Financial Officer of Foose Design.

Chip Foose and his wife Lynne first met in their college days back in 1999. Ever since their meetup, Lynne was always supportive of Foose. The same year Chip and then-girlfriend Lynne had their first child. Furthermore, she even encouraged Foose to re-engage in his studies and pursue his dreams. Eventually, after dating for several years, the couple decided to tie the knot.

As of now, Chip and his wife Lynne Foose are blessed with two children named; Brock Foose and Katie Foose. His son, Brock, is often found working in his father’s company and also makes appearances on tv.

It’s no doubt most of us still think cars are men’s toys and most of the people who are invested in this industry are males. When she started working with her husband in Foose Design, she shares her experience of discrimination. She said,

Within the context of the male-dominated custom car industry, I can say with a resounding yes, I did experience discrimination in this industry,”

“I definitely got the feeling that in this industry, women were to be seen and not heard.”

Undoubtedly, when one reaches a level of stardom, their net worth is one of the factors that the public has an eye on.

Hence, as per reports, the total net worth of Chip Foose is estimated to be approximately $20 million as of 2021. Without a doubt, his huge net worth is a fruitful result of his hard work and dedication to his work.

Chip Foose has been able to gain huge income because of his unique skills in designing automobiles. Moreover, he earns a hefty amount of profit from his car modifying business, which has been very successful throughout the years.

Additionally, Foose is also a successful tv personality who has appeared in various hit shows that pays him huge salaries.

Along with being a professional car modifier, Chip is also a designer of automobiles. His excellent talent for drawing car concepts has helped him get numerous projects and clients. Moreover, his arts and designs of automobiles have been documented in his tv series, Overhaulin’.

Without a doubt, fans quickly became huge fans of this multitalented individual. His handmade designs are made available for his fans to explore on his official website.

Truly, Chip Foose has made a name for himself by involving in cars. Moreover, from a young age, Chip has designed and modified hundreds of cars and is one of the finest in the business. People recognize him for many reasons, but there are specific works of Chip that were truly amazing.

In other words, there are some very special cars that he modified that have defined his career, such as:

He has also received outstanding awards for his works.

Chip Foose is one of America’s most successful and accomplished automobile designers. His hard work and dedication in this industry have helped him receive various awards and achievements throughout his life. Chip has also been listed in the various hall of fame, such as:

Additionally, he has won various awards for his works, such as: